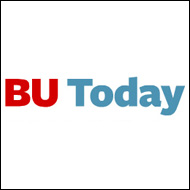 The good news is that the reconstruction of Commonwealth Avenue won’t last forever. The bad news is that it will probably seem like forever. As crews continue to work in the street and on the sidewalks along the south side of Comm. Ave., improving drainage and building conduits for lighting and traffic signals, pedestrians will need to continue to step carefully for at least another year.

The project, which began late last summer, is part of a Massachusetts Highway Department program to make the road more attractive and pedestrian-friendly.

One of the three traffic lanes on the westbound side of the street will be eliminated, the sidewalks and T stops will be widened, and additional trees and plants will create a green buffer between the BU campus and the street. The idea, says Gary Nicksa, BU vice president for operations, is to create an urban park setting for the University and to make the section of Commonwealth Avenue between Kenmore Square and the BU Bridge look more like the city’s parkways, designed by renowned 19th-century landscape architect Frederick Law Olmsted.

Michael Hathaway, assistant vice president for campus planning and construction, says the project is scheduled to be completed in late 2008. “The inconvenience will get worse in the next few months,” he says. “There’s no nice way of saying that.”

The state’s contractor, McCourt Construction, is in regular contact with BU officials. “We work very closely with them on public safety issues,” says Nicksa.

“We meet with them weekly and share with them all our University calendars, so we can coordinate on major events like Commencement and move-in. The contractors have been very cooperative — safety is a primary concern for them, too, especially with the number of people going from class to class.”

The sidewalks on the north side of Commonwealth Avenue will not be affected until the south side is completed. Work crews will then shift to the north side.

When the work is done, Commonwealth Avenue will be completely repaved, with new trees planted between the MBTA tracks and the road. The University has set up a Web site with news about the progress of the construction, and members of the BU community can sign up to receive e-mail updates as well. Although it may be hard to imagine the end result, Nicksa says that the renovation will ultimately help members of the BU community feel more connected to both the University and the city. “Right now, we have what we call a hardscape of concrete sidewalks and brick,” he says. “Anything to break that up is going to give us a more urban-campus feeling. It allows you to be living in the city, but still have that sense of being part of BU.”