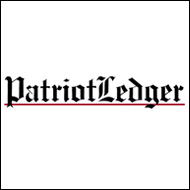 HUNDREDS OF VOLUNTEERS BRAVE RAIN TO CLEAN UP CITY

Students and members of local trade unions joined city officials and other residents for the three-hour cleanup, which collected tons of debris from dozens of sites such as Faxon Park in South Quincy, North Quincy High School, the Collins Rest-a-While Playground on the Southern Artery, and Daniel Gilbert Park in Squantum.

“It’s a really, really good cause,” North Quincy High student Shirley Kwok said, as she helped plant shrubs around her school. “It’s kind of sticky and wet, but we got a lot done.”

The cleanup was the start of a season of programs that will include a citysponsored yard care conference and a Neat Neighbors contest.

Cleaner Greener was begun in 1990 as a way to increase citizen involvement in the city’s environmental programs. Last year volunteers and city crews removed more than 350 tons of trash, abandoned vehicles and other debris from parks, playgrounds, beaches and open areas.

On Saturday laborers, equipment operators and other union workers from McCourt Construction Co. of Boston landscaped trails and roads in Faxon Park, “Quincy is a strong union town, and we want to show that the union cares about keeping Quincy clean,” said Edgar Murphy of Teamsters Local 371.

Across town in Squantum, meanwhile, dozens of of residents picked up litter and helped plant bushes and flowers in Daniel Gilbert Park.

“We want it to look nice,” said Jean Mackey, the leader of a volunteer team. “It’s a gateway to Squantum.”

“Every year it gets bigger and better,” Sheets said. “It’s become an institution in and of itself. Having a clean city makes people feel good, and self-esteem is very important for a city.” The next Cleaner Greener program will be the May 30 Yard Care Conference, a free event sponsored by the city park department. Speakers will discuss lawn and garden issues.The conference will be held from 9 to 11 a.m. at the Koch complex at 100 Southern Artery, across from Adams Field. Topics will include home composting, proper tree care and how to maintain a beautiful, affordable lawn.

The park department will sponsor a “Neat Neighbors” contest again this year, awarding prizes to residents who keep their property cleaned up and attractive year round.

For information on all Cleaner Greener programs, call the park department at 376-1251.